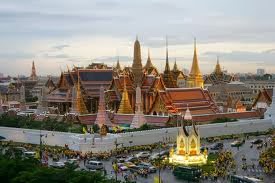 Grand Palace & Wat Phra Kaew
The beauty of the Grand Palace is very mesmerizing. Can be counted as the most beautiful building in Thailand . Built in 1782 , and managed to Otis palace of the kings of Thailand for approximately 150 years. Fusion of western and Thai architecture looks very beautiful , furnished the English-style gardens . But now is not the king's palace Thailand again , but still the Grand Palace in Bangkok sights most tourists came .
Inside the Grand Palace complex is the most sacred temple also available in all parts of Thailand , where in it the most sacred Buddha statue . Buddha statue with a height of only about 66 cm is made in the 14th century . Only His Majesty the King of Thailand only allowed to touch and change the Emeral Buddha . In one year , three times the ceremony to replace the clothes of the Buddha , namely summer , winter and rainy season . The event is intended to bring good luck for the state of Thailand in every season . Do not forget if in the Grand Palace should wear modest clothing , namely sleeved shirt ( no tank tops ) , do not wear shorts or sandals . Entrance to the Grand Palace - 500 baht. 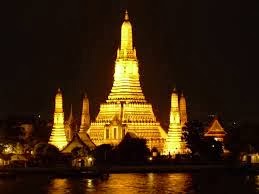 Wat Arun
Known also as the Temple of Dawn , because this temple is very beautiful when viewed against the background of the sunset from the squeeze . But if you are looking at are not so many to be able to take good photos , come in the morning . This temple is one of the oldest temples in Bangkok and popular among tourists. Buildings represent Mount Meru Wat Arun , which according to the teachings of the Buddha is the center of the universe .
Wat Arun is located on the Thonburi side , opposite the Rattanakosin Island, where the Grand Palace and Wat Pho are separated by the Chao Phraya river . Wat Arun included as one of the most beautiful temples in Thailand . Prang , or the middle part of the monument as high as 70 meters , a famous landmark not only in Bangkok , but throughout the world . Filled Decorations from China porcelain and glass misaik beautifully appointed . Not surprisingly, Wat Arun become the most favorite destination of travelers, after the Grand Palace .
Posted by Unknown at 22:35

Email ThisBlogThis!Share to TwitterShare to FacebookShare to Pinterest
Labels: Thailand

Please leave your impression for a return visit